Since early 2015, I have been logging the ambient temperature in my computer room using a Raspberry Pi and a cheap USB temperature sensor that I bought on Amazon.

Using GNU Plot and PHP, the Raspberry Pi runs tasks in cron to gather the data and compile it into a chart every five minutes. 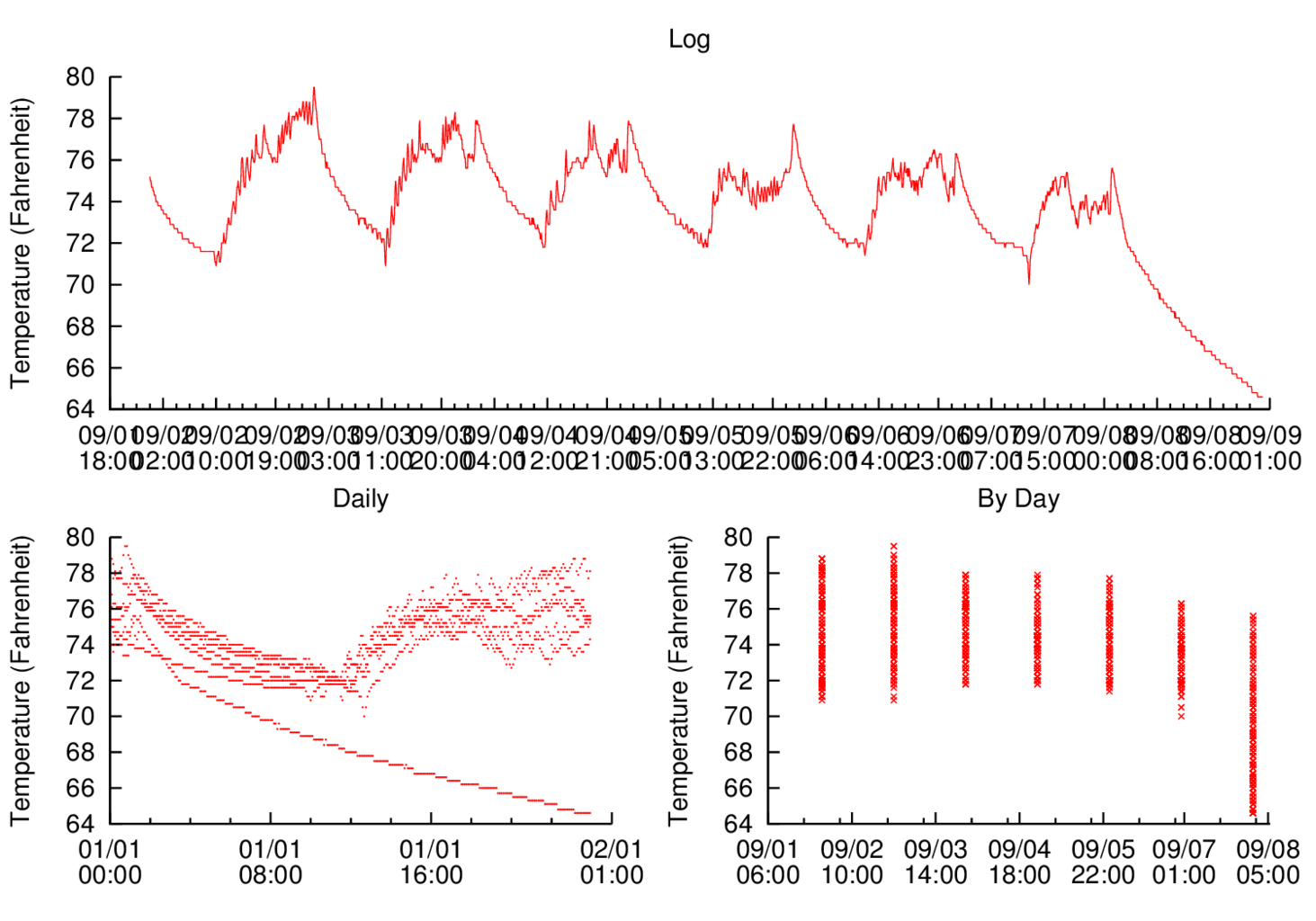 Earlier this year, I ran an experiment where I took the sampled temperature data and converted it to audio. Basically, I was curious as to how it would sound. I've taken other data and converted it to images and audio along with converting audio to image data (even storing it on paper experimentally, with varying results) but this would be unique as it was data sampled at such a slow rate.

In terms of audio bit rates. once per every five minutes translates to .0033333... Hertz. Playing back the logged readings as audio at an 8kHz sample rate means an increase of 2.4 million times from the original speed.

In this video, I demonstrate the process a bit:

That was back in March 2018. Recently, in September 2018, I repeated the conversion using the script I had created to include the data from March to halfway through September. The audio conversion was refined a bit to improve the clarity (using an extreme low-pass filter):

Here is the audio by itself:

The last five seconds of audio interested me the most because it sounded a bit more organized than the rest of the audio. Now... hearing anything other than random noise in this clip should probably be attributed to a phenomenon known as pareidolia. Being at risk of sounding like a paranormal activity enthusiast or, even worse, a pseudo-science peddler (neither of which I wish to be), let's have a listen to a noise-filtered clip of that final five seconds:

Certainly, it's probably just noise. However... let's take a little trip to crazy town for a moment.

Let's throw Occam's razor in the drawer for a moment and imagine that there were a way for radio signals to be slowed down. In this case, they would be slowed down 2.4 million times the speed at which they were originally sent. Would these ultra-low frequency radio signals have any kind of thermal effects at all? Would the RF itself influence a cheap $20 USB temperature sensor? How strong would the radio signals have to be to bounce off of something in space, moving close enough to the speed of light away from Earth to produce such a radical Doppler shift?

Nah..... it's just noise created by temperature cycles in this computer room.

Even though the simplest explanation makes the most sense, it is fun to speculate.

On a side note, should I do more of those blogs on this site? Usually, most content updates are music and artwork. Normally I don't consider my random thoughts to warrant a site article / blog post. Drop by the forums or shoot me an e-mail with your thoughts if you're so inclined. To be perfectly honest, I don't hear much at all from people that drop by this site (outside of the handful of forum regulars) and it would be nice to know if anyone else is still out there.