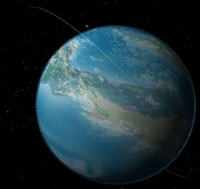 This is the world of 2214. The great migration has taken humanity far out into space to settle this distant planet.

Kaperth is a lot like Earth. It has flourishing vegetation, and several native species of animals. Unlike Earth, though, all of the inhabitants are herbivores, including the evolved humans which originated from Earth.

The planet orbits the sun of the same name, which is located in the Pleiades cluster, in the Taurus constellation. The planet has one major ecosystem that has adapted well to settling by humans.

Pollution of any sort is virtually non-existant on the planet, with the exception being in the industrial metropolis of Aufdek. Energy is derived by chemically reacting waste materials from the cities. Each major civilized area has a collective battery, which essentially is the trash / sewage system - an efficient solution.