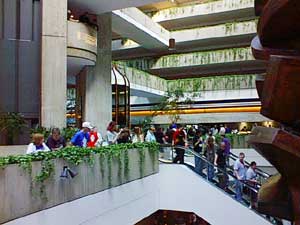 I attended Anime Central again this year. This is the second year I have attended, and having been to this con once before, it was easier and faster to get to the events I wanted to attend.

The drive up to Chicago was easy until the last stretch of I-65. BIG traffic jam; especially on I-80 and inside Chicago. I sat still for three hours; making the trip from Cincinnati to Chicago a total of 8 hours. Upon arriving and getting my pre-registered badge, I first went to the video rooms and checked out the selection of Anime. This year, however, I spent less time watching anime and more time walking around the con.

The best event I attended on Friday evening was the "Anime Hell / Midnight Madness". They showed several parody videos, an old Kool-Aid commercial, and even Heino. Heino gives me nightmares. Heino + Bad Techno... but the point was to be ridiculous. Very funny stuff there.

Saturday, I attended the Naze-Nani Megatokyo feature, followed by the autograph / drawing from Piro and Seraphim session. That was fun. 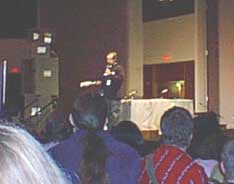 The "Naze - Nani Megatokyo" panel was pretty cool. I'm not sure how they do it, but Piro and Serpahim seem to make this work out really well; it's always a hit. This year, the main feature was the Fan Appreciation Bat™, a coveted treasure that I've often wished I could borrow for certain special occasions.

The other panels... well, I missed them. The days go by so quickly at conventions that it's hard to cram your entire schedule into the time alloted and still feel like you're actually on vacation.

Next year, hopefully I'll get a spot in "Artists' Alley" if I sign up early enough. Those spaces go fast. 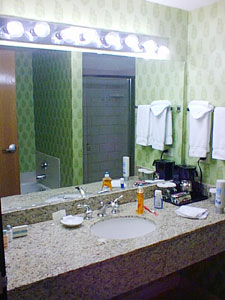 After that, I headed back to the Hotel restaurant to have dinner; and it was there that I made a terrible mistake.

Let me sum it up as eloquently as I can:

Fish and chips. Too greasy. Bad choice. If you ever eat the fish and chips there, may the good Lord have mercy on your bowels.
But that's a serious warning, folks.

After dinner and the penalties of dinner, I attended the Masquerade and Soap Bubble. I met Miroku from the forums and we walked around for a bit, but since I was due to return Sunday, I had to go to bed at a reasonable hour.

On the road, the "Krazy Kaplans" billboards once again assured that I would have nightmares for months, and there were a couple of seriously bad traffic jams... I sat for three hours on I-80 on the way up there. 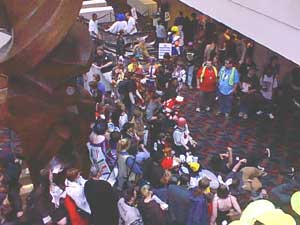 One thing that kind of bothered me was that the hotel was ridiculously expensive! Definitely won't be able to buy any new toys for a while.

Oh, and when I got home, I dropped the GPS... and it broke. That means I'll have to get another one before next year's con, or I'll get lost, somehow. Seems like I'd be able to navigate without it by now, but... give me the opportunity and I'll be stuck in the run-down side of town with no gasoline or a map.