Collecting data in real time can be not only educational but very useful later on down the road. While driving down that road (figuratively and literally) it becomes even more beneficial to combine real-time data.

Back in 2007 I picked up a CarChip E/X and used it for a while to study my driving habits. It helped display patterns in driving and engine statistics but it was eventually replaced by a Scangauge II because the ScanGauge displayed data right there in the car rather than requiring an upload to a computer after the fact.

The CarChip's data recording capabilities became useful again during an experiment. I wanted to combine GPS data with that of the CarChip in order to map out the engine statistics during a test trip.

I wrote a script in PHP to merge the CarChip's data file export with the GPX-formatted export from my phone's GPS tracking program. After quite a few adjustments some useful XML-based files were produced. For the experiment, the script generated GPX and KML files for use in Google Earth and other mapping software. It also generated a couple of subtitle files for use in video taken of the trips. The video was shot using a Kodak Zi8 mounted on a tripod secured in the passenger side area of the car. It did a pretty good job; the electronic image stabilization helped keep the video from becoming too jittery during the trip. 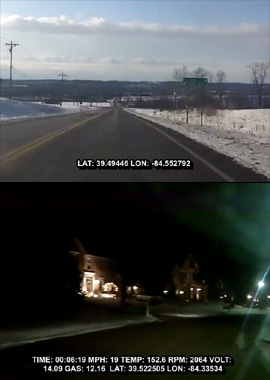 The subtitle files generated by the script were used for text overlays in the videos taken of the trips. It took some tweaking to get the carchip data to line up with the GPS data and also synchronizing this with the video but it worked... sort of. There were some issues with the data drifting out of sync for some reason.

While not perfect, it yielded interesting results and served more or less as a proof of concept. Installing a system like this permanently in the car isn't really feasible nor desirable right now. It might, however, be a nice feature for future designs to have a camera built into the dash and some type of data collection system tied either to the driver's account or a storage card in the vehicle. These ideas do seem to carry a sort of "Big Brother" air about them.

All wireless access points broadcast unencrypted radio signals so that computers can discover them and connect. Some access points use encryption while others are open. You probably have a wireless network; I use one as well. Having a wireless network means having a small part of a vast infrastructure of wireless routers than can be mapped and passively used for geolocation.

It is important to note that mapping wireless routers by passively receiving their beacons is perfectly legal. It is not, however, legal to attempt to connect to a wireless network that you are not authorized to access. I am not a lawyer but accessing open networks without permission to do so is a legal grey area and in some locations it is considered illegal. There has been some debate about this topic and, quite frankly, I'm not that well educated about the specific laws regarding unauthorized wireless access. There is a (rather threatening in tone) advisory regarding this practice but it is important to note that passive scanning is apparently considered legal in the notice. Again, my interpretations are not bulletproof.

At any rate, the practice is called wardriving which is named after wardialing, which is what the main character in War Games (1983) did to get himself in a whole mess of trouble. To be honest, I don't care for the application of the term "wardriving" to the act of passively scanning for open, unencrypted signals. There is no probe of any system involved nor, as stated earlier, any unauthorized access of any kind.

With these explanations out of the way, I wanted to perform a survey of my area to see how many people, in general, had wireless networks. I knew that my neighbors and I used them and that most of us were diligent enough to encrypt and secure our networks. With no intent to access anything, I performed the survey using a GPS and my laptop running Network Stumbler.

I was surprised at how many access points showed up as I drove around town. Limited to only the roads that I drove, it turned out that a very high percentage of households and buildings seemed to have them. It worried me quite a bit that around 20% of those were completely unsecured.

Hackers are bad news and this site has dealt with them in the past. I urge anyone running a non-secured wireless router to secure it or seek someone who can help you do so. I will not wardrive with the intent to access someone else's wireless network but there are plenty of people who will. Lock your router down with some form of encryption, please! 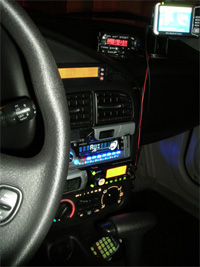 Driving around in my car is more like sitting in an airplane cockpit thanks to all of the junk I decided to stick on the dashboard.

Some of the items pictured were just there for temporary use; it's not that tacky on a day-to-day basis. The amateur radio rig uses a GPS to transmit my location via D-STAR whenever I transmit on a digital repeater. It's useful when it works but getting the data into the repeater, let alone to show up in the D-PRS Activity database.

Other than that, the ScanGauge is helpful to keep an eye on engine temperature and any service codes (such as the one that happens if the fuel cap is loose) and of course the GPS is handy.

With these displays and readouts all updating in real time, however, the most important thing to consider is the road. The readouts get a quick glance here and there but watching the road is top priority.