This was the first year for this convention. It took place at the Crowne Plaza Hotel in Blue Ash, Cincinnati, Ohio. The weather was pretty decent that Saturday and we stopped to get something to eat at City Barbecue before heading to the convention. 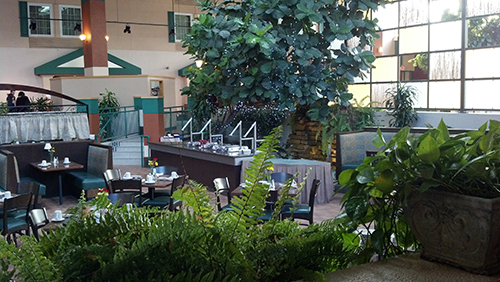 The hotel was fairly large and fortunately not very crowded. For a first year convention, there was a pretty decent turnout; I'm bad with estimating crowds but I'd say a few hundred attendees were there through the course of the evening. The convention lasted all weekend but we were only there on Saturday.

The first panel we attended was the Dr. Who identity panel, where three people read essays examining different aspects of the Doctor's various incarnations. I don't really know that much about Dr. Who but I used to watch the old series when I was a kid back in 1991. I've seen a few episodes of the new series and, while I think it looks great and seems exciting, I have not followed it closely. 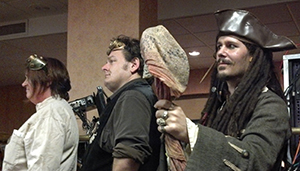 After that panel, we checked out the vendors' hall, which had the standard medieval fantasy items such as replica swords and armor, some Lovecraftian mythos items, at least one booth dedicated to furries (I'm not a furry but there's some pretty good artwork from that community... avoiding the provocative stuff, of course) and lots of collectibles and books.

We then attended the costume contest, which was pretty awesome. 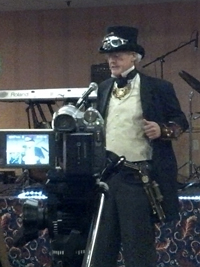 I really enjoyed this part, especially. Not only did the participants have great costumes but they also played the part. Captain Jack Sparrows was especially convincing; not only did he look exactly like the character but his speech and mannerisms were spot on.

We also had a steampunk Dr. Horrible and Captain Hammer as well as several Dr. Who participants. This convention, while having an official focus on fantasy and science fiction in general, had a disproportionate representation of Steampunk and Dr. Who themes. I don't consider that a bad thing, though. Steampunk is really popular right now and it has an aesthetic that I personally enjoy.

Pandoracon was fun this year and since it's local, it's much easier to attend and also much less expensive than, say, Anime Central. I plan to attend next year.