After skipping a year, I returned to Anime Central in 2007. Not much had changed from previous years except the registration process had improved quite a bit and the lines were a lot shorter. The attendance, which steadily increases each year, had increased yet again (I don't know the exact numbers for 2007; they're probably listed on Acen's web site somewhere). 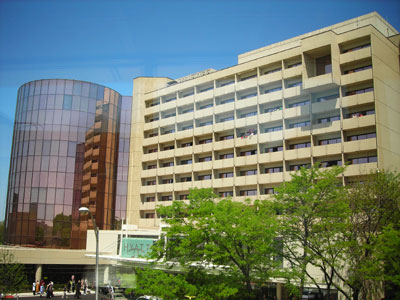 The trip to Chicago this year was more difficult since there was heavy construction on the major thoroughfares. Because of this, I had to take last-minute detours and spent about an hour driving through Southern Chicago looking for a way back to the freeway and avoiding toll roads. I had installed a new GPS in the Saturn, but road construction and awkward detours negate any advantage most GPS units provide. 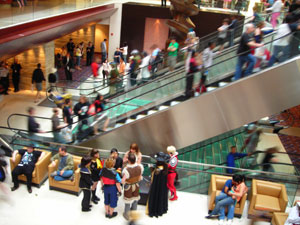 The Hyatt was renovated recently; new stairs and a media bar were added to the hotel. I spent most of my time walking around and trying to get into as many panels as possible.

The entire facility was very crowded on Saturday; it became very hard to get around after about 3 pm due to the amount of people in the halls. There were lots of opportunities to take photos of cosplayers but some people stopped in the hallways to take photos, which impeded traffic. The people in charge of the convention intervened to discourage photo-taking in the narrow hallways, which helped significantly after a while. Later in the evening, things were moving smoothly again and it became much easier to get around the convention. 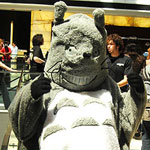 I did manage to take a couple good photos of cosplayers. My favorite was Totoro.

I stayed at the Hotel Sofitel this year; it was expensive but everything about the hotel was fantastic. The food was especially good. For Portal players out there, please be advised that this is one place where the cake is not a lie. The cake was delicious.

The game room was... well, a game room. There were plenty of good games but I didn't have the patience to play any of them. Honestly, I'm not much of a gamer these days. It's more fun to watch others play, in my opinion.

I didn't buy anything in the exhibit hall this year. There were plenty of great items to buy; lots of manga, DVDs, and everything you'd expect anime fans to want to buy at a major convention. If the hotel wasn't such a large part of the trip's expense, I'd have probably picked up a couple manga.

The trip back was a lot easier since there weren't any detours on the return route. I did, however, spot plenty of those billboards for Krazy Kaplan's fireworks. Those things still creep me out.