Well, I wasn't sure exactly how to go about explaining the process for making music here at Nitrocosm Studios over the years. It has recently changed, though, so this is the best time, if any, to kind of ramble on about it. 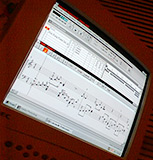 I started composing MIDI-based music in 1995. Back then, my rig was a Packard Bell 486 with 8MB of RAM, which I had upgraded from 4MB in order to use Adobe Photoshop. Anyway, my keyboard at the time was a Yamaha PSR-510 which had limited recording abilities in itself but would quickly run out of memory if one played too many notes while recording.

That early rig was using Cakewalk 2.0 (or 3.0, whatever the first version for Windows 3.11 was) but I had to either use the sounds on the PSR-510 or the built-in FM synthesis on the sound card. It wasn't until 1996, when I built a brand new computer with a Sound Blaster AWE32 that I was able to use true wavetable synthesis and make my own sampled instruments.

Needless to say, my inspirations at the time, and mostly even now, were and are Japanese RPG soundtracks. This being the case, I went about making a very wide variety of music, from psuedo-orchestral to rock and techno. The instruments back then were far from realistic. 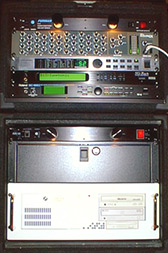 I upgraded to a Roland XP-10 in 1998 and later on I started building a studio rack of standalone synth modules. In 1999, after a bit of arguing with the sales clerks, I bought the very last Roland SC-880 Sound Canvas module - the display / floor model - from Mars Music in Springboro, Ohio. I also added a Korg SG-Rack synth to my rig.

I would use these two hardware synthesizers all the way through 2010, when I finally upgraded my computer to Windows 7 and therefore had to replace the old version of Cakewalk (which I had been using all along) to something compatible with Windows 7.

I'll get to the modern synth configuration in a bit. 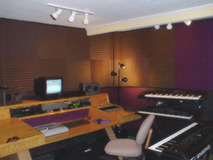 As mentioned before, the SC-880 and Korg SG-Rack were the two synths I used for more than a decade. Occasionally, sound fonts would be mixed in but most of the time everything was created using hardware-based sounds run through hardware-based effects and mixing. This sounded fairly good for the genre of music I was making (mostly mock-RPG soundtrack stuff) but the hardware wiring did introduce a certain small amount of line noise. Also, after a while, the sounds on the synths began to sound quite dated and it was physically difficult to keep leaning over to adjust settings on the rack instead of the computer screen where I did the sequencing. 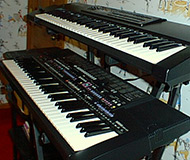 Back to the huge 2010 upgrade, in which I not only began using software synths but had also upgraded to Adobe Creative Suite 4 Production Premium, my whole workflow changed for the better. No longer was I leaning over to adjust analog knobs on the rack. Everything was finally on my computer screens and I could leverage the dual-monitor configuration that I was already using for Photoshop, After Effects, and pretty much everything else.

Although I had done some limited guitar work on my songs from 2004 onward, the new software made it a lot easier to record actual guitar tracks, too. I should mention, aside from studio configuration and software, I'm not much of a guitar player and a lot of the guitar tracks on my music prior to 2010 were actually performed by my brother, who is a phenomenal guitarist and professional drummer.


There are actually some more synths I use, too, not to mention a whole library of different free sound fonts I've hunted down on the web.

Right now, my favorite software synths have to be split into two categories. There are the bread-and-butter synths, which I need to round out and complete any composition, and those that have the amazing sounds that I can't resist including in a song one way or another.

Cakewalk's TTS-1 has those great, classic Roland sounds that, thanks to my use of the SC-880 and XP-10 all these years, I can't imagine living without. When all the other synths just don't have that one particular sound I need (like a hi-hat or an evenly-textured string pad), the TTS-1 delivers. The other synth I always use in everything now is SampleTank. SampleTank is the most versatile synth I have right now, since it lets me stack up to six effects and everything can be programmed for MIDI control. I recently added some sound libraries to it, too.

Those two are my old standards. The two favorites of mine in terms of just mind-blowingly amazing sounds are Z3TA+ and Miroslav Philharmonik. I use Z3TA+ for any and all dance / techno / dubstep / grindy, gritty, high-energy tracks.

Now, of course, I'm not just an electronica fanatic. Having a little formal training in music theory (not much; I learned most of it on my own), classical music is delicious to my ears and hearing the sweet sound of a live orchestra with real instruments is a real treat. Miroslav Philharmonik has the most realistic orchestral sounds I've ever heard in a synth. Obviously, I cannot have a live orchestra perform my compositions. This synth does a pretty good job of simulating that, though. Oh, it's made by IK Multimedia, the same folks that make SampleTank, by the way.

Now that the synth fanaticism is out of the way, here's how I go about composing music.

Usually, I'll hear something somewhere that I really like and decide to try to reproduce its general style and feeling. After doing that, I'll take that style of composition and experiment with making variations. By now, a pretty solid idea has formed.

Normally, I'll start over from scratch at this point; either clearing all the track data or just plain starting a new project. The sounds of the synths themselves, as I'm flipping through presets, usually inspire me more than anything. Any time I discover a cool new synth or sound that helps me cook up new ideas, too.

Up until I upgraded Cakewalk, any tweaking I did with the notes was done by editing them in classical music notation view. Now, I just use the piano roll view, which allows far more precise control even if it doesn't carry the same feeling of "knowing proper music theory". Note durations are far more easy to control this way.

Overall, I compose directly from my MIDI keyboard. I used the Yamaha PSR-510 and Roland XP-10 as my MIDI controllers until I got an M-AUDIO Radium 49. This keyboard is easier to fit in my lap, more lightweight, can be powered by and connected via USB without relying on my MIDI cables or MIDI interface. The best thing about the Radium 49 is that it has 8 sliders and 8 knobs that can be programmed to control any MIDI channel I want. This makes things AWESOME when composing electronic music where lots of parameters are varied throughout the song to produce cool effects.

Now that I use all software synths, the MIDI interface and MIDI cables aren't even used anymore. Since all the hardware synths still function, though, I leave them connected just in case I feel like going old-school with things again.

Okay, now about the compositions themselves, once an idea becomes concrete:

It really depends on the genre but in general I pay close attention to harmony, chords, point, counterpoint, rythm, transitions between song sections, and a balance between consistency and enough changes in the song to keep it interesting. A lot of the process is entirely subconscious. After a late night of recording, my mind will often play tricks on my and bizarre random-associative thoughts form (really weird stuff like sudden flashbacks to early childhood and completely nonsensical concepts). I should note that I do NOT use drugs, tobacco, or alchohol; it's just the intense, long-term immersion in the process where much of the heavy lifting is done by my subconscious. Normally it's made worse by lack of sleep (not knowing when to quit for the night).

Speaking of not knowing when to quit, I find it best to get up and walk away from the project after about 36 hours (with breaks and sleep and work, of course) into a project. One's ears get tired and I actually lose the ability to hear the audio properly due to this fatigue.

Finally, the process of mastering: My brother says all of my mixes sound flat and that the drums are too quiet. Since he's a drummer, I consider this a matter of personal taste. I have used a variety of tools to master the audio (for those of you who don't know, "mastering" is equalization and normalization of volume levels, basically) but I mostly use Adobe Soundbooth's mastering plug-in nowadays.

I go by the graph. My Roland MA-8 speakers have a pretty even frequency response but I don't trust my own ears after working on a song. Normally I'll try to get the spectrum graph as even as possible and have the audio normalized to where it hits the "red zone" regularly. Exactly how loud I master a track depends on the genre I'm doing. For classical, I try not to squash the dynamic range too much. I also try to keep the stereo separation sounding natural for anything orchestral or that simulates live instruments in room ambience.

For dance, techno, dubstep, or anything else electronic in style, I pump that volume way up. I'm guilty of not giving things enough bass, though. Lots of dynamic compression and stereo separation give a track that loud, FM-radio, DJ-mix sound. I'm no DJ but I like that sound in the applicable genres.

Well, that's a pretty long article up there. I hope it's informative. This is how I do music.